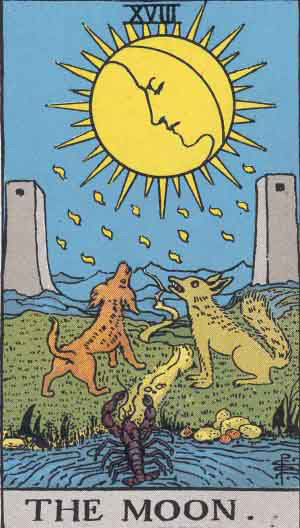 Under a growing and full moon, sits a dog, the domesticated nature and a wolf, the wild nature. In the foreground is a crayfish emerging from the deep water of the subconscious. From the water, a path leads up to two towers that stand at the entrance to the unknown land. Here are hidden dangers and enemies. So it is believing in oneself and gently caring. Prediction: Only intuition and not reasoning can move on. A situation where you only have to rely on yourself. Crisis of faith, defamation, deception, hidden enemies.