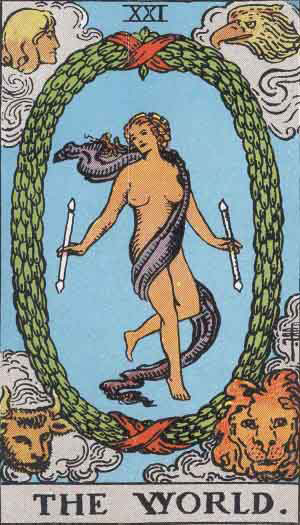 Description: The world, most often referred to as the Universe, shows a woman wrapped in a purple robe dancing in the middle of a large oval laurel wreath. She holds a wand in her hands and represents the positive and negative poles of the universal energy.

In every corner of the map you see the same figures as in the Wheel of Destiny: the lion, the bull, the angel and the eagle – the four creatures Ezekiel saw in his vision of God in the Old Testament. If something is absolute and complete, it is shown here in the map. Contradictions meet and unite, everything is in balance and goes up into a higher unity.

Inside the laurel wreath, chaos has turned into order, and contains the universe. In the corners man, an eagle, a bull and a lion, four protectors to secure the stability of the cosmic forces. They are the guardians of heaven and at the same time represent the four fixed signs in the zodiac, the four elements and the four seasons. The card indicates that the fool’s journey is ending, he is now the master of life.

Interpretation: The card first and foremost symbolizes fulfillment and satisfaction. When you draw this card you will be in a situation where you are successful and have achieved your goals and visions and you can reap rewards. Spiritually, you can now round out a phase of your life and you will probably find that you are integrated with the self and in harmony with nature and the universe.

The card is usually associated with something good and with good aspects – but even though the card symbolizes fertility, more and more journeys and / or projects await us in life.

Satisfaction does not necessarily have to be in the form of an end. It is about being on top and capable of building new worlds inward and outward. You will see that everything is in the right place and you will see the meaning behind all your life experiences and at the same time accept the conditions you have as a human being here on earth. You sense that you can fulfill yourself, and that everything that you have sought in the outer world is in fact found within yourself.

Prediction: The goal has been reached. Culmination of a number of events. Finally and assured success. Fulfilling desires. Satisfaction of desire.

Number: The number of the card is twenty-one, two and one together gives three, the number for creation and integration.

Astrology: The card has no immediate connection to characters or planets.

Affirmation: I appreciate making the world a better place to be for all people. I am one with the universe. Everything is in me.

The Universal Principle: The universe is the principle of individuation, totality and wholeness.

Above are four very different versions of The World.

Oswald Wirth diminishes the Christian symbols and instead draws inspiration from the occult, through writings especially by Éliphas Lévi. The occult came from here on to influence how tarot cards were illustrated. Most famous is the Rider-Waite tarot card with lots of symbolism from Egypt, the Jewish Kabbalah, astrology, alchemy and Freemasonry. When you thus interpret The World you have different options. It is advisable to start with the illustrations we have from Rider-Waite as they contain a lot of information in their imagery.