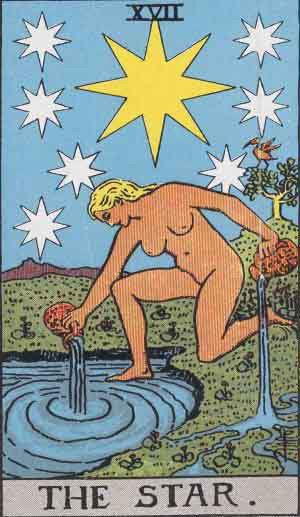 Description: We see a naked woman sitting kneeling by a lake and pouring water from life. She has a jug in each hand from which she lets the water of life flow, respectively, beyond the earth of consciousness and into the water of the subconscious.

You get the impression that her water supply is inexhaustible and that the two jars are connected to two inexhaustible sources. Her nudity refers to authenticity and truth, and her youth refers to renewal.

Above her shine the eight-pointed stars; symbol of the cosmic energy. The seven smaller stars could represent the seven centers of consciousness in the body. The landscape behind the woman is lush and green, and the bird, sitting in a tree behind her, symbolizes the spirit’s ability to rise to higher levels of consciousness. The stars suggest that you have access to divine guidance wherever you are.

Interpretation: The Star symbolizes hope, optimism and expectation. There are bright perspectives in store, maybe an unexpected outside help, maybe a divine inspiration from the inside. Everything is settled in peace and balance, and maybe a little fairy pops up and brings with it a glimpse of the unusual.

The star indicates that you want a sense of purpose, meaning with your enterprise and have the confidence that good always happens. You will have a good sense of living in the world without having anything to hide but everything to give. Wealth in abundance is your quality.

You may feel a desire to be in harmony with your surroundings. The stars on the map suggest that you are filled with hope, wonder and magic – things that can keep us alive and to the fire, even when it looks darkest. The card symbolizes hope, promises, renewal, and that there is light after dark. If this is not obvious to you right now, you may need to look at your confidence and the faith you have for life.

Keywords: Other words describing the Star are: spiritual vision, questions about the meaning of something, inspiration, clear visions, fertility, limitlessness, infinity, birth, independence and influence on others.

Prediction: Hope. Expanding the mental and physical horizon. Great love is given and received.

Number: The card number is seventeen, one and seven give eight, which stands for rebirth, renewal, baptism and new life.

Astrology: The card is linked to the Aquarius sign with its innovative and creative mind.

The Universal Principle: The principle of communication and proper timing.

Above are four very different versions of The Star.

Oswald Wirth diminishes the Christian symbols and instead draws inspiration from the occult, through writings especially by Éliphas Lévi. The occult came from here on to influence how tarot cards were illustrated. Most famous is the Rider-Waite tarot card with lots of symbolism from Egypt, the Jewish Kabbalah, astrology, alchemy and Freemasonry. When you thus interpret The Star you have different options. It is advisable to start with the illustrations we have from Rider-Waite as they contain a lot of information in their imagery.