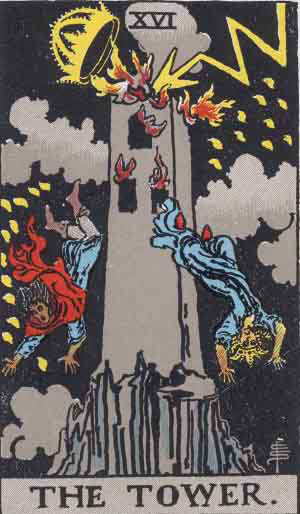 Description: The tower shows a burning high gray tower on top of a single pinnacle. A cruel storm rages and a yellow lightning crashes into the tower, and the crown that once formed the roof is now about to fall. The black background of the card and the frightening drawing together seems very bleak and violent. It is a turbulent scene where human life is also at risk.

The tower looks quite serious and is naturally often misinterpreted. The tower itself can symbolize the personality, and the fire and lightning show that everything that is not a real part of our being must be burned or thrown out of the personality.

The man and woman who fall from the tower into the abyss represent ancient mental, emotional, intuitive and physical modes of expression that have become obsolete and no longer belong to the authentic or essential Self. Pain and fear are painted in their faces.

The card symbolizes freedom from restrictions as the tall cramped prison tower is now shaken in its foundations. The elements rage around the tower – human construction – and demonstrate the triumph of nature over human arrogance.

Interpretation: The card symbolizes that something is being destroyed, but exactly what it is is not entirely clear. But this is a sudden change that really brings something to life. The change comes unexpectedly, it is unfair and immediately brings nothing good to it.

But if you get stuck in an unbearable situation, the card means breakthrough. In any case, the map says something about the restoration, renewal and deconstruction of old forms. The Tower shows that rigid, captivating, outdated and inappropriate structures or ideas must be torn down and replaced by new ones.

In this way, the card offers an opportunity for cleansing, renewal and cleaning up old behavioral patterns or delusions. It can symbolize false pride, big ideas, beliefs or ideologies that need to be corrected or removed. It is a sign that new and healthier structures need to be built.

The tower is not a bad map, as one might think. All tarot cards must be considered neutral as a starting point. Of course, getting rid of old habits and structures can seem difficult, but is at the same time liberating.

Number: The card is sixteen, and one and six together give seven, which is the number of positive action.

Astrology: The card is linked to the planet Mars and its vitality and power.

Affirmation: I am determined to realize myself as I really am. I gladly break down old useless patterns.

The Universal Principle: The tower represents the universal principles of healing, renewal, and restoration.

Above are four very different versions of The tower.

Oswald Wirth diminishes the Christian symbols and instead draws inspiration from the occult, through writings especially by Éliphas Lévi. The occult came from here on to influence how tarot cards were illustrated. Most famous is the Rider-Waite tarot card with lots of symbolism from Egypt, the Jewish Kabbalah, astrology, alchemy and Freemasonry. When you thus interpret The tower you have different options. It is advisable to start with the illustrations we have from Rider-Waite as they contain a lot of information in their imagery.