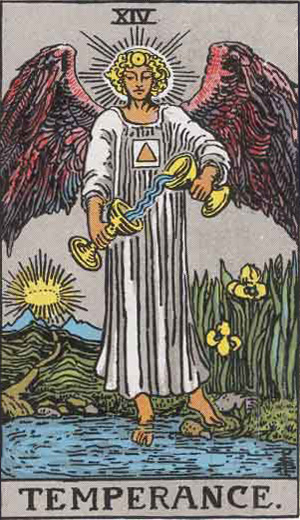 Description: Temperance shows a man with wings, or an angel standing by a stream. One foot rests on the ground in consciousness, and the other rests in the stream of subconscious, which can also be seen as an indication of the bridge between mind and body. In the hands, this closest to androgynous creature holds two jugs and pours liquid from one to another.

It is the essence of life that is poured from the silver cup of the subconscious to the gold cup of consciousness and back again. Carefully pour content from one to another, without wasting anything – an indication of mastery.

The liquid fluid between the cups indicates the constant movement needed to maintain health. It seems that the water flowing between the two jugs is an uninterrupted stream of energy connecting both jugs. The symbols of the card represent the overall unification of opposites that create something new.

Temperance also shows some mastery. At the foot of the angel, two lilies grow as a symbol of renewal. In the background, a winding road leads over hills to mountains and the sunrise in the distance. The triangle on the angel’s chest is a symbol of the unity of body, mind and spirit. It can also be interpreted as a triangle in square: spirit in matter.

Interpretation: The card symbolizes compromise and cooperation. It indicates that contradictions are mixed. The right mix is ​​important for the end result to be good. For example, in a relationship, the needs of both parties must be met in order for the relationship to remain healthy.

An odd contribution by one party creates disharmony. Temperance suggests that by uniting two or more principles, a greater whole can be created. Temperance reminds us that it is important to strike a balance between paradoxes, contradictions and polarities in our nature.

The card suggests that you need to mix contradictions. You may need to use cautious control when balancing the various elements. You now have to cooperate and compromise relationships. You must engage others in your emotions to achieve greater harmony. In its negative aspect, Temperance may refer to wasting creative energy or retaining stiffened emotions.

Prediction: The woman is trying to reconcile two opposite qualities: to create balance. A situation that must be carefully combined if results are to be achieved. A harmonious relationship.

Number: Temperance has number fourteen, consisting of four and one, which in turn turns into five, symbolizing the growth, inspiration and collection of many parts into a whole.

Astrology: Temperance is associated with the astrological sign Sagittarius. Temperances qualities are to express our visions and dreams.

Affirmation: I am a creative, well-integrated individual. I am an open channel for creative energy.

The Universal Principle: Temperance represent the principle of integration, synthesis, and interacting energies.

Above are four very different versions of Temperance.

Oswald Wirth diminishes the Christian symbols and instead draws inspiration from the occult, through writings especially by Éliphas Lévi. The occult came from here on to influence how tarot cards were illustrated. Most famous is the Rider-Waite tarot card with lots of symbolism from Egypt, the Jewish Kabbalah, astrology, alchemy and Freemasonry. When you thus interpret Temperance you have different options. It is advisable to start with the illustrations we have from Rider-Waite as they contain a lot of information in their imagery.