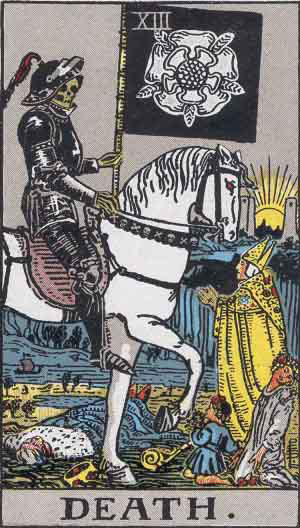 Description: Death shows a skeleton dressed in an armor that is riding across a field. The skeleton does not symbolize death, but rather transformation. Death’s armor is black, and Death holds a flag with a white flower on it. Black is the color of death, while white symbolizes purity; together they refer to the body’s mind and spirit being purified through death.

In the field lies a king – his crown is a short distance away – and by his side stands a bishop, praying. Presumably his hour is near too. The fact that it is a king who has died on the card shows something about death coming to you, whether you are rich, powerful or powerful.

A woman and a child kneel down beside the body on the ground and are in mourning, awaiting their fate as well. The woman symbolizes the beauty and love of death. These people represent the world of man. There is a bluish landscape in the background, which could indicate that it is at night. Although the card seems cold and destructive, it does bring with it a new order.

The symbols in the card represent in three ways the three stages of the death / rebirth process: the armor represents that we must take care of ourselves, protect ourselves during periods of change and give-away. The rising sun as well as the ship sailing remind us that in order to undergo transformation, we need to let go of our old identity in order to be able to express a new one.

Interpretation: Death stands for endings, changes and a cycle that has now ended. It may be that a certain kind of lifestyle has come to an end, a relationship is over or a career is over. You can think of it as having the board erased clean and a release from something, and you have gone to the beginning of something else.

That is, one does not need to join the traditional awareness of death that goes on anxiety. But when you draw this card, it will mean that something is nearing its natural end.

But the card Death also automatically refers to new life, but both endings and beginnings can be exciting and scary. When you meet this ending, it may turn out to be some sadness or you will become nostalgic. It is a grieving period that is natural and must be accepted.

Keywords: Other words that characterize Death are: renewal, past, you die every moment, transition to another dimension, loss and critical change, liberation from old bonds, degradation, becoming, profound external change, freedom, waivers and bonds that are cut.

Prediction: Renewal, new opportunities and ideas, removal of something that has been an obstacle. Consciousness change.

Number: The card has thirteen, which symbolizes order.

Astrology: The card is linked to the sign Scorpio, which in the tradition of astrology is associated with transformation, death and rebirth.

Affirmation: With ease and dignity, I let go of people and situations. I make the necessary changes in my life with ease.

The Universal Principle: Death symbolizes the universal principle of emancipation, letting go and moving on.

Above are four very different versions of Death.

Oswald Wirth diminishes the Christian symbols and instead draws inspiration from the occult, through writings especially by Éliphas Lévi. The occult came from here on to influence how tarot cards were illustrated. Most famous is the Rider-Waite tarot card with lots of symbolism from Egypt, the Jewish Kabbalah, astrology, alchemy and Freemasonry. When you thus interpret Death you have different options. It is advisable to start with the illustrations we have from Rider-Waite as they contain a lot of information in their imagery.