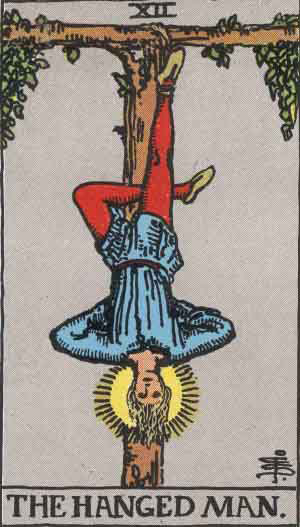 Description: The hanged man shows a man hanging with his head down in one foot. He does not look abused, his face is rather calm, satisfied and exalted. The hanged man hangs his head down so that blood (and thoughts) can run him to his head. His hands are tied on his back and his legs form a cross. He seems to have taken on a most uncomfortable and powerless position.

The awkward position The hanged man occupies symbolizes that in order to break limiting patterns it is necessary to assume a markedly different attitude or position, such as turning up and down on ourselves to see the inhibitory pattern or locked point in the consciousness of a different point of view.

It also refers to the fact that the traditional values ​​of society have been turned upside down and that the truth is the opposite of what it appears to be.

Interpretation: The card symbolizes the sacrifice of something to achieve something else. Here it is about sacrificing something to gain inner understanding or awareness of something. The man thus hangs himself to gain special knowledge and power. It’s time to go in the think box.

Everything seems to be in jeopardy, and innovation is really needed to move forward. This Symbol is a reminder that there are always many more choices, solutions and perspectives to consider than the ones we currently have.

The man chooses to change his posture to find insight and understanding in a new way. It shows that one has to sacrifice in order to gain something of value. It may also be that one has to distance oneself from the ego and rely on deeper aspects of oneself. It is important to remember that what you sacrifice is voluntary. You make the choice by asking yourself what is really important in your life and what you can do without.

Number: The number of the card is twelve, which relates to renewal and salvation.

Astrology: The card could be associated with the sign Pisces since the man is hanging in his foot, and Pisces is the sign of astrology that rules over his feet. The fish is often associated with a victim and with dissolution and death as it is the last sign in the zodiac.

The universal principle: The principle of surrender, old patterns are broken.

Above are four very different versions of The hanged man.

Oswald Wirth diminishes the Christian symbols and instead draws inspiration from the occult, through writings especially by Éliphas Lévi. The occult came from here on to influence how tarot cards were illustrated. Most famous is the Rider-Waite tarot card with lots of symbolism from Egypt, the Jewish Kabbalah, astrology, alchemy and Freemasonry. When you thus interpret The hanged man you have different options. It is advisable to start with the illustrations we have from Rider-Waite as they contain a lot of information in their imagery.