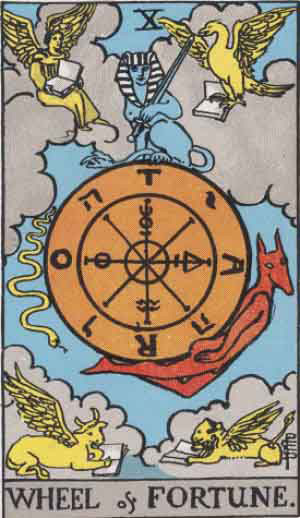 The Wheel of Fortune

Description: The Wheel of Fortune (The Destiny Wheel) shows a wheel with several symbols of Egyptian, Hebrew and Christian tradition. For example, the four Hebrew letters that make up the name of God or Jehovah appear. The letters are: yod, hey, vau and hey. The wheel hovers in the air between clouds. On each cloud is a figure – the four living beings from Ezekiel’s view: a bull with wings, a lion with wings, an eagle and an angel. Each one sits with a book in his hand and reads.

Furthermore, there is a snake, a sphinx and a devil around the wheel. We can see that as the wheel turns, the snake will fall off the wheel, in return the devil will come up. The Sphinx, half woman, half lion sits and thrones on the fate of human beings.

The Wheel of Fortune is an ancient symbol of life changeability. Most often it is seen with the man on the left who rises on the wheel, the mature man in his heyday on the top of the wheel and the old man falling off the wheel on the right.

It is the destiny card that reminds us that life always alternates, always has its ups and downs and its growth, coronation and decay. One must know that the word destiny in this context does not mean that human life is predetermined. We ourselves are the masters of the choices we make, and we must take responsibility for them – the stupid acts as well as the clever ones.

There is a stability and a variability symbolized in the wheel, in that the circumference moves and attracts attention, and the axis is the stable, quiet center. At the same time, the constant movement of the wheels tells us that everything is changing and in constant motion.

When you pull The Wheel of Fortune it symbolizes that a new beginning is coming. As you begin a new chapter, you will also be present for the cycle and magic of life. This cycle says that just as the earth and nature are moving and accepting the changes to come – without judging them as being good or bad – then it will be beneficial for you to face the changes with the same acceptance.

Find out which attitude is most beneficial for you to have for your situation. The cycle of the wheel symbolizes that the first half of the journey in the outer world is completed, and it is now time for the second, inner journey to begin. You may also find that problems are resolved because circumstances change.

Keywords: Other words describing The Wheel of Fortune are: life’s constant ups and downs, karma, luck and change.

Prediction: A new beginning. Major events that cannot be influenced. To reap what has been sown. Financial possibilities.

Number: The Wheel of Fortune has number ten, the first of the double-digit numbers. Ten symbolizes the completion of a cycle and the beginning of a new one.

Astrology: The card is linked to Jupiter, which stands for growth, joy and development.

Affirmation: I am flexible in times of change. I take care of my changes.

The Universal Principle: The wheel of destiny stands for the principle of opportunity, breakthrough, and expansion.

Above are four very different versions of The Wheel of Fortune.

Oswald Wirth diminishes the Christian symbols and instead draws inspiration from the occult, through writings especially by Éliphas Lévi. The occult came from here on to influence how tarot cards were illustrated. Most famous is the Rider-Waite tarot card with lots of symbolism from Egypt, the Jewish Kabbalah, astrology, alchemy and Freemasonry. When you thus interpret The Wheel of Fortune you have different options. It is advisable to start with the illustrations we have from Rider-Waite as they contain a lot of information in their imagery.