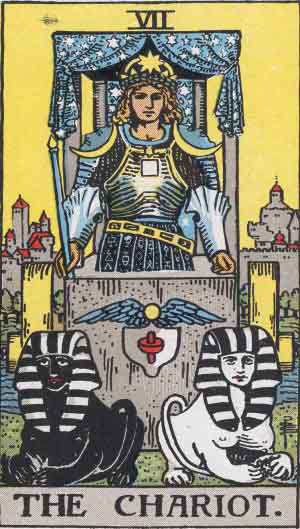 Description: The Chariot shows a man, – an armored knight, standing in a chariot drawn by a black and a white sphinx. The Sphinxes are symbols of contradictions, and the riddle that the cargo driver must solve. The card symbolizes the struggle to control the forces of a conflict.

The knight’s golden and beautifully decorated armor shows his powerful energy, which is associated with the sun and the male element.

On the shoulders of the knight are crescents attached, symbolizing that he reigns over and masteres the oscillating emotions associated with the moon, the female element, and mastery of the underlying unconscious forces. In his hand he has the wand of will.

The canopy above him is blue and filled with stars, representing the sky. And together with the wagon which stands for the earth, they refer to the expression: as for the above, so also for the below. The four columns represent the four elements that energy expresses on the physical plane: fire (electricity), air, water (liquid) and earth (solid mass).

The Chariot is a picture of the constant interaction that is about balancing contradictions, such as masculine and feminine, strength and weakness, positive and negative, thought and feeling. The carriage controller in the center of the sphinx is a symbol of the one who is controlling and of the equilibrium achieved by proper steering.

The card refers to the fact that the driver must steer properly between, for example, his opposite feelings or thoughts. There can be one of two things: Either the carriage goes off over sticks and stones or it stands still! The driver does not have much power over things, he cannot move in his stiff armor, but it provides good protection against attacks on his vulnerable interior.

Interpretation: The innermost being of the card symbolizes a union of conflicts caused by opposing forces. The wagon controls our conscious mind while the sphinxes account for the various impulses we have to deal with. The Sphinxes can be compared to reason and desire. That way, the Sphinx can represent conflicts where you know what to do, but still want something else.

When you draw this card, it is a sign that you must constantly weigh and balance your desires using your rational mind. The Chariot also symbolizes an urge to combine calm and activity. If you are drawn to this card, it is time to look at changes in relocation, travel, career, family and home.

A fight or conflict may be ahead – though with great opportunity for triumph over adversity. And if you control The Chariot correctly, which you should have the energy for, there is the opportunity to achieve great harmony. Determination and confidence are present to an extent to achieve success. But be careful not to be too aggressive and future without regard for others.

Keywords: Other words that characterize the chariot are: conflicts, struggle, compromise, security of victory, vitality, past mistakes, finding a way, ready to discover another world and self-affirmation.

Number: The number seven stands for progress and triumph.

Astrology: The card is linked to the zodiac sign Cancer, which among other things represents emotions.

Affirmation: I am responsible for everything I cause. I distinguish between what is essential. I have confidence in my discernment.

The Universal Principle: The Chariot represents change and causal relationships as the universal principle. A Taoist saying reads that change is successful when “the big tree” has its “roots by the flowing river”. This proverb is very telling of the principle that characterizes The Chariot, as it reminds us that in times of change it is necessary at once to involve calm (the big tree with its roots) and activity (the flowing river).

Above are four very different versions of The Chariot.

Oswald Wirth diminishes the Christian symbols and instead draws inspiration from the occult, through writings especially by Éliphas Lévi. The occult came from here on to influence how tarot cards were illustrated. Most famous is the Rider-Waite tarot card with lots of symbolism from Egypt, the Jewish Kabbalah, astrology, alchemy and Freemasonry. When you thus interpret The Chariot you have different options. It is advisable to start with the illustrations we have from Rider-Waite as they contain a lot of information in their imagery.