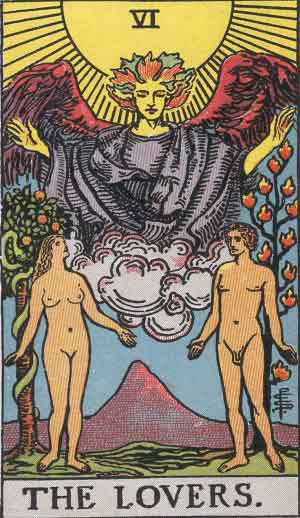 Description: The lovers show Adam and Eve standing naked and side by side in a landscape. Adam stands in front of the Tree of Life, which bears twelve fruits, one for each of the signs in the zodiac. The sun and an angel hover over them. The angel symbolizes Amor and reminds us of the two forms of love: love as passion and love as compassion. but it also seems that the angel gives the couple his blessing.

Adam and Eve face a choice: before the fall, or the innocent childhood. But the expression of the senses and the carnal love and sexuality lurk around the corner, symbolizing the snake in the tree of life behind Eve.

From the history of the Bible, Adam and Eve can be interpreted as being tempted by the forbidden fruit. They thereby choose sexuality and procreation, which makes them godly in the ability to create new life. But just as it brought them the gift of life, their choices also brought them death.

As you know, the apple in the tree of life represents the expulsion from the Garden of Eden and the card also contains a symbol of choice and deselection. One must disengage from one previous relationship before one can wholeheartedly move into another. For example, a man releases himself from his mother and gives himself to his girlfriend. Ie there is also an emotional choice associated with the lovers.

Interpretation: This card has two main meanings. The first is about a love affair. The card may indicate a strong bond between two people, such as a work partnership and a love affair. The second meaning has to do with choice. The questioner must make a difficult decision that will usually involve some sacrifice.

A split between what you think is right and what you want to do. The questioner may have to choose between two people, situations or jobs, one of which offers financial benefits while the other meets creative needs.

The card refers to the consequences a hasty or unforeseen choice, for example, in a relationship or a love affair, can have. But the choice is not just about love and romance. It can also be about a situation, a circumstance of great personal importance that involves choices. The card can also indicate a loss or disappointment, because when you choose one, you lose something else. Adam and Eve chose knowledge, but death followed. Choosing love and passion can also bring vulnerability and pain.

Keywords: Other words that characterize The lovers are: love as a path to it, divine, attracting, uniting opposites through love, unity, harmony, raising awareness through a relationship, partnership, contradictions and decisions.

Prediction: The start of new love. A temptation or attraction is present. The battle between the spiritual and the carnal love.

Number: The card number is six, the number for harmony..

Astrology: The card is linked to the astrological sign Gemini.

Affirmation: I possess inherent social skills. I appreciate and honor the principle of friendship.

The Universal Principle: The lovers represent the art and skills needed to maintain human relationships as the universal principle.

Above are four very different versions of The lovers.

Oswald Wirth diminishes the Christian symbols and instead draws inspiration from the occult, through writings especially by Éliphas Lévi. The occult came from here on to influence how tarot cards were illustrated. Most famous is the Rider-Waite tarot card with lots of symbolism from Egypt, the Jewish Kabbalah, astrology, alchemy and Freemasonry. When you thus interpret The lovers you have different options. It is advisable to start with the illustrations we have from Rider-Waite as they contain a lot of information in their imagery.