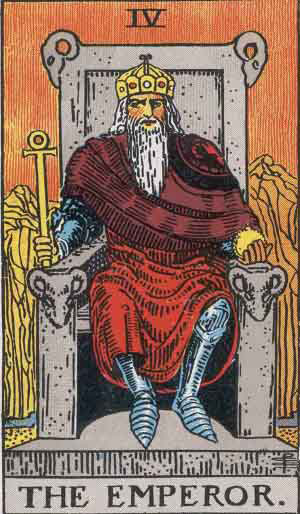 Description: The Emperor sits on his throne, amidst the harsh nature surrounded by bombastic mountains. In both hands he holds the symbols of power. In his right hand he holds the cross of life, the symbol of his masculine power and the creative energy with which he governs his kingdom. The globe in his left hand symbolizes that he is traveling with the globe in his hollow hand – he governs wherever he appears.

Aries, symbolized by the two rams on the chair, is a sign of fire that represents the mental powers, adventure and exploration of the mind. Behind the mountains in the background, the sun is rising as a symbol of nature’s light source.

He is serious, thoughtful and wise. The emperor symbolizes worldly power, authority and willpower. He also symbolizes the link between the ideal and the real, he is the bridge builder.

Interpretation: First and foremost, the emperor symbolizes leadership and the ability to take the lead, and the ability and willingness to bear a responsibility. If you are drawn to this card, it is time to look at whether you are exercising power and leadership in ways that are empowering for yourself and others.

It’s time to incorporate more structure and order into your life. The card indicates that it is time to deal with the material world. It’s time to be ambitious and start acting right away. Dreams must be realized. Things to do with worldly progress, status or other achievements.

The emperor symbolizes an ideal situation for starting a project, be it business or on the domestic front. Let your energies be channeled toward making your creative ideas work solidly and practically. The card may also indicate a meeting with a fatherly, authoritative person who exerts an influence on you. This one can turn out to be a powerful friend or a stubborn tyrant figure.

Keywords: Other words that can describe the emperor are: material success, dynamic, outward, stability, self-control, the archetypal father, masculine power and creativity.

Number: The emperor has number four, which symbolizes solidity, formality and concrete organization.

Astrology: The emperor is linked to the astrological sign Aries, which stands for progress and strength.

Affirmation: I enjoy launching and starting projects. I materialize dreams and ideas. I act.

The Universal Principle: The emperor represents the universal symbol of power and leadership – the visionary, the one who acts, the pioneer and the builder.

Above are four very different versions of The emperor.

Oswald Wirth diminishes the Christian symbols and instead draws inspiration from the occult, through writings especially by Éliphas Lévi. The occult came from here on to influence how tarot cards were illustrated. Most famous is the Rider-Waite tarot card with lots of symbolism from Egypt, the Jewish Kabbalah, astrology, alchemy and Freemasonry. When you thus interpret The emperor you have different options. It is advisable to start with the illustrations we have from Rider-Waite as they contain a lot of information in their imagery.