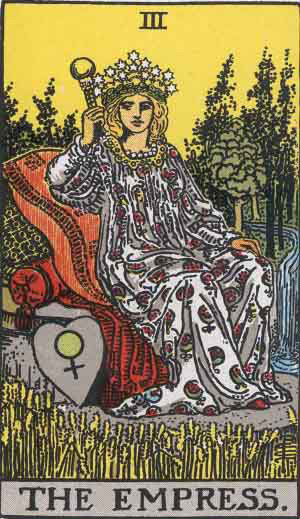 Description: The Empress shows a mature woman wearing rich clothes. She seems content and peaceful. She is wearing a full-length suit, which could indicate a pregnancy. Her suit is decorated with fruits, a picture of nature’s fertility. Under her comfortable cushions, a heart glows, upon which is found the astrological sign of the planet Venus.

On the crown of the Empress are twelve stars, representing the zodiac’s twelve signs, which can be said to be the mold of everything created in our solar system. In the foreground is a mature cornfield, which stands for rich and lavish harvest and can refer to the Greek goddess Demeter. Demeter symbolizes both grief and fertility and joy: she brings both birth and care to her children, but must also face that she must inevitably be separated from them at some point.

In the background, life-giving water – the water of life – flows from a waterfall into a pond. It is a symbol of the union between the male and the female, which unites to create new life. At the same time, the water gives life and sustenance to trees and shrubs and to the mature cornfield at her feet.

The Empress exudes love, gentleness and wisdom and shows with the wand she holds in her hand that she represents the unity between intellect and heart. She is the mother of all kinds of beings.

Interpretation: The Empress is a symbol of accomplished potential, peace and well-being. First and foremost, the Empress symbolizes the ability to give and receive love in balanced and appropriate ways. She is therefore excellent as a visual affirmation to enhance one’s emotional balance. If you are drawn to this card, there is a need to think about how you give and receive care, nourishment, comfort and love.

The card can also mean the birth of a child or project. Both need patience, nourishment and care, which must not result in stagnation and suffocation. Thus, the Empress reflects the domestic stability, ability to protect and maternally responsible care.

The card points to a time of sense of security where the foundation can be laid for future growth. Be with the female, motherly side of yourself. Rejoice in caring for others. Don’t fight – you have what you need right now. Do as the Empress: Put yourself in a comfortable place and let things happen.

Keywords: Other words that characterize the Empress are: femininity, connection of spirit and matter, abundance, fertility, marriage or children, power in the home, generosity, connectedness with nature, the archetype of mother, earth, mother nature, warmth and motherly authority.

Numbers: The number of the card is three, representing the encounter between contradictions that could create a third and new existence.

Astrology: The map is linked to the planet Venus, which stands for love and beauty.

Affirmation: I give with wisdom and I receive with wisdom. I am love. I give life. I have everything I need right now. I am accomplished.

The Universal Principle: The Empress is the Principle of Combined Love and Wisdom. She is a symbol of humanity’s ability to extend and receive love.

Above are four very different versions of The Empress.

Oswald Wirth diminishes the Christian symbols and instead draws inspiration from the occult, through writings especially by Éliphas Lévi. The occult came from here on to influence how tarot cards were illustrated. Most famous is the Rider-Waite tarot card with lots of symbolism from Egypt, the Jewish Kabbalah, astrology, alchemy and Freemasonry. When you thus interpret The Empress you have different options. It is advisable to start with the illustrations we have from Rider-Waite as they contain a lot of information in their imagery.