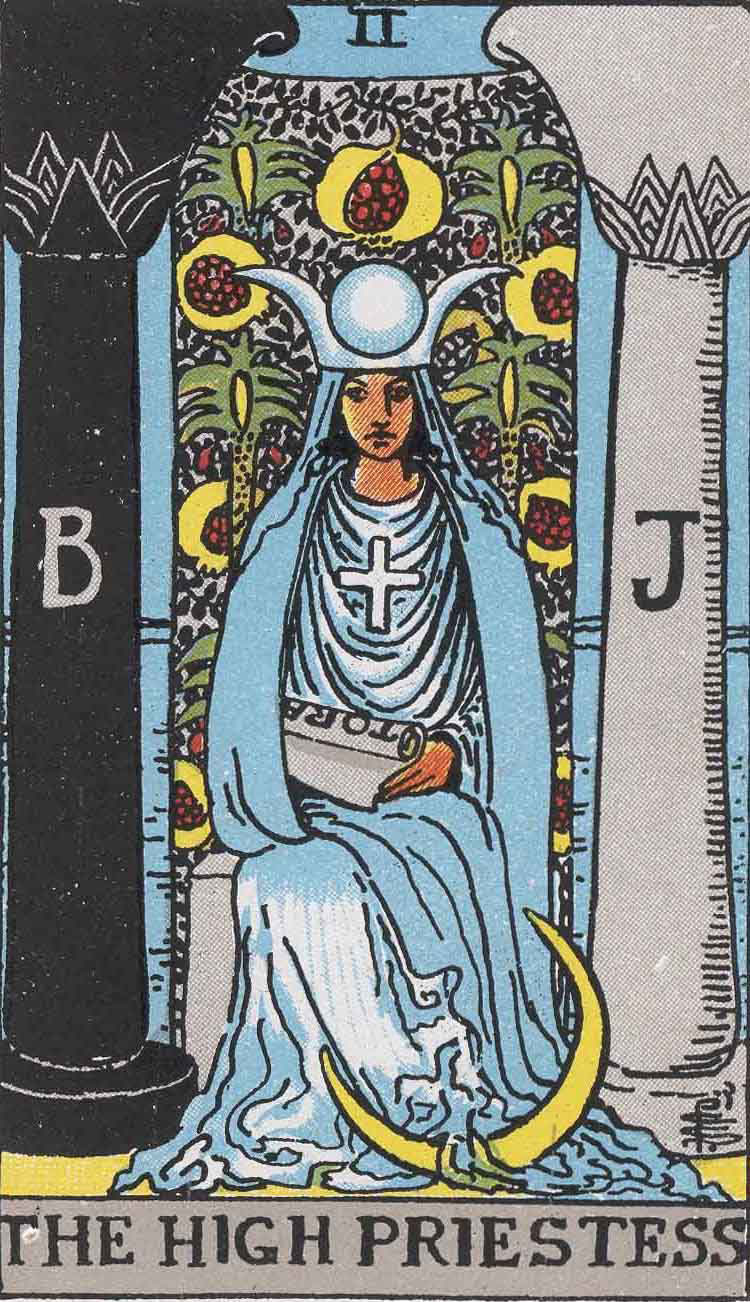 Description: The high priestess is wearing a blue robe. She wears a white cross on her chest, which may indicate a connection to the Virgin Mary, or the space & time cross. She sits between a black and a white pillar on which stands Jâ and Bâ, which can refer to the two bronze pillars, Boaz (founder) and Jachin (strength), which stood on the eve of the Temple in Jerusalem. Together they mean stability.

The High Priestess is an exponent of contradictions that are in balance with each other. The veil behind the high priestess is lined with pomegranates – the fruit of death and marital love and it conceals a door to the psychic’s inner world. Behind the curtain we also glimpse the water – a symbol of the unconscious, wealth that can be accessed through the depths of the unconscious mind. Her crown or horned head ornament has a moon shape, indicating a connection to the lunar goddesses Isis and Frigg. At her feet lies the symbol of the rising moon. In her hands she has the Torar scroll, the divine law. It is half hidden from her cloak to show that something is hidden, kept secret, and something is revealed.

Interpretation: First and foremost, the High Priestess symbolizes intuition. If there is a need to develop this, you may feel an urge to be yourself, to be drawn by water, to understand dreams, to perform contemplative or meditative activities. Your tolerance for restraints, ties, and external inhibitions may be in a small place and emotional instability may occur.

Often, you are also drawn to this card when you have a well-developed intuition and are in deep inner calm and have confidence in what you see, both externally and inwardly. The card thus also refers to an increased interest in spiritual, occult or esoteric activities, such as study or meditation.

There is often a desire, through these activities, to learn more about the hidden world of perception and reason. Perhaps, if the time comes, secrets will be revealed in the form of, among other things, knowledge and truths for one. So there is a great potential that has not yet been realized.

It may also prove that an insightful person can have a special influence on you. Meditate and give yourself time to listen to your inner self. Be receptive, open and clear. Move your attention from your rational thoughts to your intuition. The time is to develop intuitive powers. Don’t act, wait.

Prediction: The influence of a wise woman on what is being asked. A warning to keep quiet about what should not be talked about. Listen for intuition.

Number: The card number is two which symbolizes duality.

Astrology: The High Priestess is linked to the Moon, which stands for deep emotions and the past.

Affirmation: I am a very sharp and intuitive person. I follow my inner voice.

The Universal Principle: The High Priestess represents the principles of intuition, independence, self-reliance and inner resources.

Above are four very different versions of The High Priestess. Cary-Yale Visconti tarot cards from around the 1420s are mainly designed to be beautiful and shows friends and family. The beautiful old Italian tarot set also has its emphasis on the artistic expression. Marseille tarot cards are simple as they were made so they are suitable for wood printing.

Oswald Wirth diminishes the Christian symbols and instead draws inspiration from the occult, through writings especially by Éliphas Lévi. The occult came from here on to influence how tarot cards were illustrated. Most famous is the Rider-Waite tarot card with lots of symbolism from Egypt, the Jewish Kabbalah, astrology, alchemy and Freemasonry. When you thus interpret The High Priestess you have different options. It is advisable to start with the illustrations we have from Rider-Waite as they contain a lot of information in their imagery.