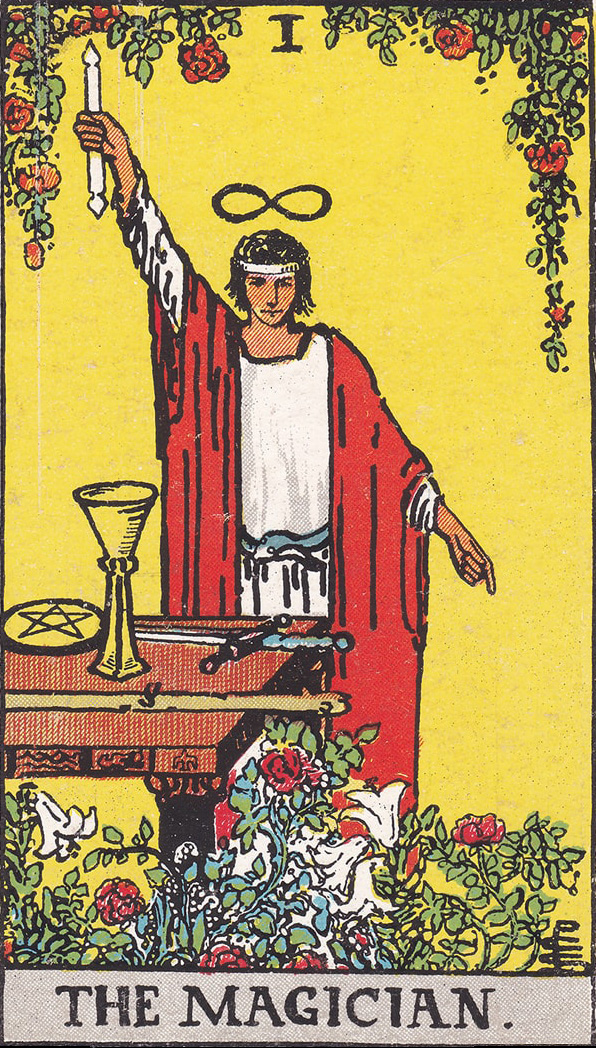 Description: The card shows The Magician wearing a red robe symbolizing his desires and a white tunic which symbolize the purity of his spirit. The red roses and white lilies in the foreground are the outward reflections on these qualities.

On the table in front of him are his props: swords, sticks, goblets and coins. These represent the four astrological elements: Coins (earth), Swords (air), Wands (fire), and Cups (water). These represent different behaviors or ways of communicating or relating depending on the situation.

Above the magician’s head is drawn a horizontal number of eight, the mathematical sign of infinity. This is also the sign of the Holy Spirit’s talent for using intuition. The tool on the table thus indicates the magician’s many opportunities and talents. The ibis or phoenix wand in the magician’s right hand symbolizes that he is able to communicate from a spiritual or philosophical point of view.

One hand pointing toward the sky represents eternal life. As a waistband, the magician wears a snake that bites itself in the tail. This symbolizes the idea that life is eternally self-sufficient and nourishing by itself.

Interpretation: The magician symbolize that you possess powers that can be used to begin something new. It shows that you have time for action and to unfold your energy. The card symbolizes need or ability to communicate and is therefore excellent as visual affirmation to enhance one’s communication skills.

The right communication consists of a choice between many different expressions, combined with the right timing. Thus, the card also reflects adaptability and versatility. The magician symbolizes that you have reserves of dynamism. Your choice lies in whether you want to use your mind (Sword), imagination (Wand), heart (Cups) or body (Coins) in your expression.

Be aware if there is something you would like to communicate and think about which way it would be best – and worst – to do this. The positive aspect of the card is willpower, while its negative side points to a weakness of will or lack of tenacity. It is up to you to explore all possibilities and trade with the tools you have at your disposal.

Keywords: Other words that characterize the Magician are: flexibility, will, illusions, magical work, creative initiatives, will, male energy, urge to do something, awareness of the means you have reached as a human, abilities and opportunities for new ventures.

Prediction: Willpower, willingness to take a risk, ability to draw power from above and lead them to manifestation, creative and tactful abilities. It’s time you say your clear opinion.

Astrology: The Magician is related to the planet Mercury and expressions through communication.

Number: The card has number one, the creative power number.

Affirmation: I communicate effectively. I communicate clearly. I realize myself. I have what it takes to change the situation. I have responsibility for myself. I am responsible for my Self.

The Universal Principle: The magician represents the universal principle of communication: As above, also below.

Above are four very different versions of The Magician. Cary-Yale Visconti tarot cards from around the 1420s are mainly designed to be beautiful and shows friends and family. The beautiful old Italian tarot set also has its emphasis on the artistic expression. Marseille tarot cards are simple as they were made so they are suitable for wood printing.

Oswald Wirth diminishes the Christian symbols and instead draws inspiration from the occult, through writings especially by Éliphas Lévi. The occult came from here on to influence how tarot cards were illustrated. Most famous is the Rider-Waite tarot card with lots of symbolism from Egypt, the Jewish Kabbalah, astrology, alchemy and Freemasonry. When you thus interpret The Magician you have different options. It is advisable to start with the illustrations we have from Rider-Waite as they contain a lot of information in their imagery.