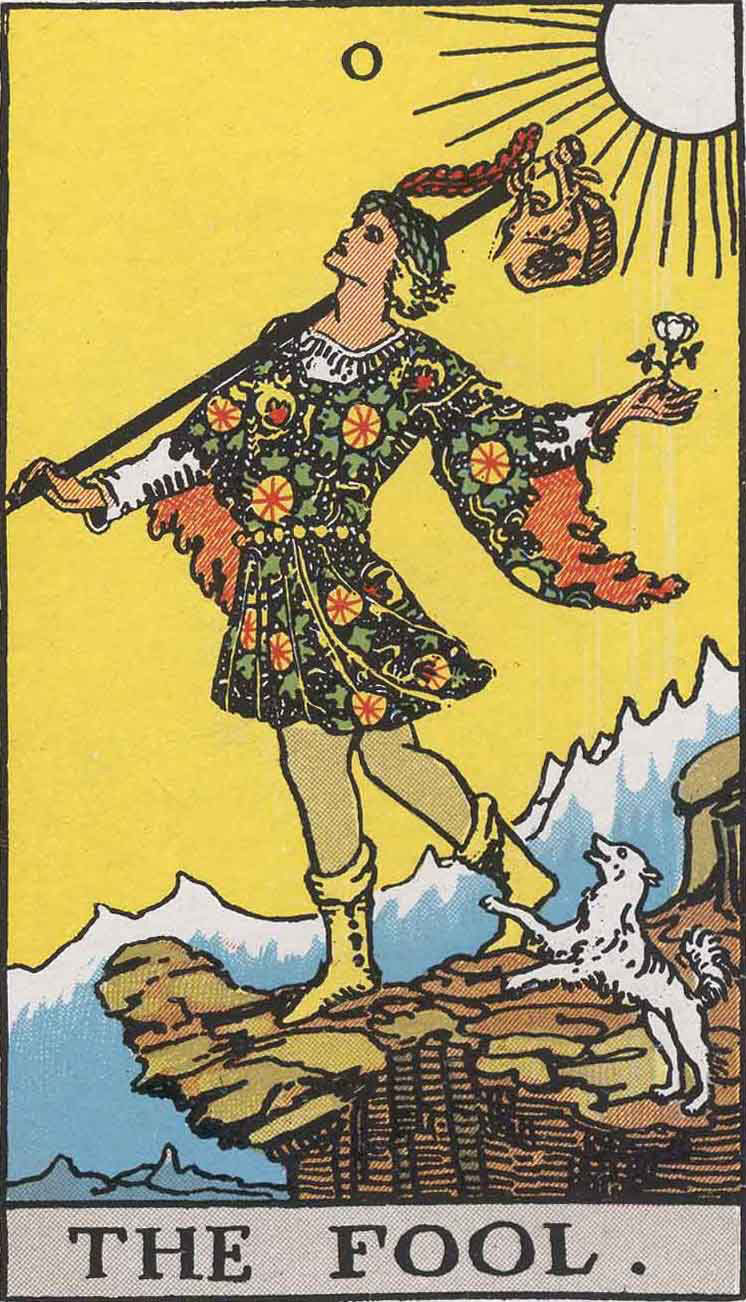 Description: The fool is about to step over the edge of a cliff, thus standing at the edge of the abyss. He does not seem to know where he is going. The risk associated with such nonsensical behavior is necessary because the map indicates a need for change, new experiences or adventures. A dog at his foot attacks or warns him. This refers to his mixed feelings for the journey; fear of the unknown mixed with enthusiasm.

On the cane of the will that he carries over his shoulder hangs an embroidered bag or jumper containing what he needs to use along the way. The rose he holds symbolizes his spiritual pursuit, and the feminine. Its white color symbolizes the purity and innocence that surrounds the situation. The hat of the fool is made of bay leaves and is a symbol of success. The fool is free as the bird, without discipline and control over anything. He has realized himself and is on his way out into the new world, free from anything that binds. He is depicted in a romantic light as a walking man who has nothing to lose but everything to gain.

Interpretation: First and foremost, the fool symbolizes that one is free from fear and therefore excellent as a visual affirmation to strengthen courage, boldness and the creative expression needed to bring new parts of his life to expression. The fool shows you that old methods are outdated and suggests a strong desire that a change must or will take place. He does not pay attention to the anxiety and thereby it loses its power over him. A new foundation needs to be built, a new chapter begins, and there will be a need to jump into the unknown and do something completely new.

But the fool also shows the desire to imagine new ways of experiencing and relating to life. This reflector of the future and possible goals and visions may seem unconventional (in keeping with custom and practice), foolish and even silly. But it is important to keep in mind that the desire and drive for change is often stronger than the fear. You need to confront the problem or challenge you are facing, and it is likely that both you and especially your surroundings are ready for change. Be open to the gift. Experience the moment spontaneously. Look to the future and follow the path of your heart.

Keywords: Other words that characterize the fool are: trust, openness, ideals, risk, a quantum leap, freedom and independence, birth, naivety, opportunities that arise, the beginning of a new cycle, a risk to be taken, a new truth or meaning, cheerfulness, creative initiatives, abilities and opportunities for new ventures, the search for a new and more rewarding truth or meaning.

Prediction: Beginning with something new. Unwise behavior. An action taken without overlooking the consequences. Desire for unattainable goals. A choice ahead.

Numbers: The card is without a number and can fit anywhere.

Affirmation: There is nothing to fear, I respect the nature that I am. I have confidence in life. I’m on the right track.

The Universal Principle: The Fool represents the universal principle associated with the state of consciousness we experience before birth and after death.

Above are four very different versions of The Fool. Cary-Yale Visconti tarot cards from around the 1420s are mainly designed to be beautiful and shows friends and family. The beautiful old Italian tarot set also has its emphasis on the artistic expression. Marseille tarot cards are simple as they were made so they are suitable for wood printing. Oswald Wirth diminishes the Christian symbols and instead draws inspiration from the occult, through writings especially by Éliphas Lévi. The occult came from here on to influence how tarot cards were illustrated. Most famous is the Rider-Waite tarot card with lots of symbolism from Egypt, the Jewish Kabbalah, astrology, alchemy and Freemasonry. When you thus interpret the Fool you have different options. It is advisable to start with the illustrations we have from Rider-Waite as they contain a lot of information in their imagery.